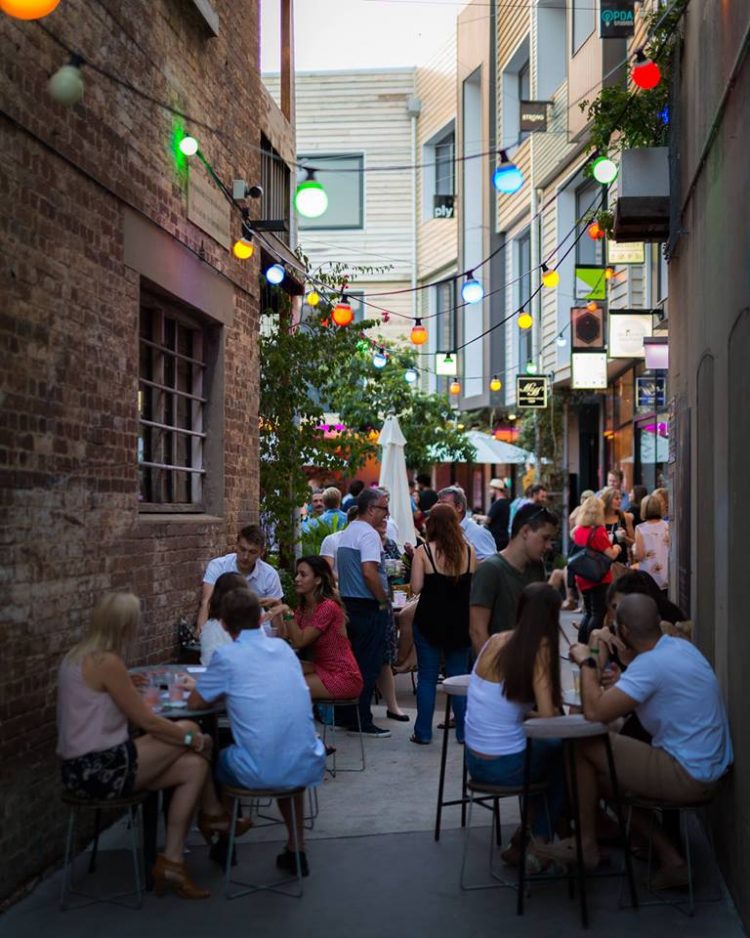 Hey ya! How is everyone going? Too bored yet? Lol!

Let see if I can help you out somehow… This time let’s take a tour around the Valley, this very interesting suburb of Brisbane. The most diverse and democratic one in my point of view. The suburb of Fortitude Valley (its oficial name) is located really close to the central area of Brisbane, and also linked to New Farm, another interesting suburb which I will be talking about in more details later on. The Valley has got all sorts of commercial shops, bars, pubs, theaters, night clubs, and a very effervescent LGBTQI+ scene in Brisbane. It is kind of Brisbane’s night out “Disneyland”, if we could say it more specifically, considering we can often find a sea of teenagers and students in general having their very effusive drinking party experiences. By the way, going out and watching that is a hell of fun by itself. Lol! Location of the three lanes in the Suburb of Fortitude Valley, Brisbane. Source: Google Maps, 2020. Some recent very interesting projects have emerged around that area, bringing even more life to its already vivid streets and urban atmosphere. “The Lanes Fortitude Valley”, a project developed by Arthur Apostolos, area resident and entrepreneur, and his family, present in the hood since the 1950’s. By the way, just as curiosity, I met Arthur randomly in a very interesting event in The Valley…we can see that it is actually successful on creating ways of connection between people.

The whole idea started as a way to make better use of the back areas of some existing shops and also make possible small retail and commercial business to exist in the area, considering rent prices are going higher every year. Currently, there are three main commercial lanes part of this particular project in the Valley: Winn Lane, Bakery Lane and California Lane. Arthur Apostolos first graduated as an Accountant and worked in the industry for a while, both overseas (USA, UK and Switzerland) and in Australia, until he realised, he wanted to become an Architect. Then, when he got established back in Brisbane, he enrolled at the Architectural course at QUT, from where he graduated as a Bachelor of Architecture (Hons) in 2010, even though he has never “officially” worked as one.

When in Brisbane, Arthur has always lived in the Valley and during his childhood helped his dad out with the family business, the famous California Café opened by his father George Apostolos, where today California Lane is located. That’s actually where he gets his inspiration to the new developments from, a time when the Valley had a lot of small retail shops and reduced urban scale. During his childhood his dad also used to let rooms to people who couldn’t afford renting houses or apartments in the area, and they also used to feed the tenants for a cheaper price at the café. We could say that Arthur’s particular spatial and Architectural eye started to build up since that time, even though he doesn’t work as a proper Architect today, but still as a developer with a special talent for urban spaces. As he mentioned to me during our meeting, investing in the lanes was a way to return to the feeling the Valley had in the past (during the 1950’s and the 1960’s) when the area was full of small shops, just like the European most famous urban centres, such as Paris and Barcelona. Even though the lanes are now already completed, he keeps dreaming and investing in new businesses in the area. I have recently interviewed Arthur, the lanes’ developer, about those projects and the result you can find in this post as it follows. I really hope you all enjoy it! I don’t think there are projects that inspired me. I think there are cities and places that inspired me. I would take the context of the city of Tokyo and go there and see the energy. Or maybe like Melbourne. I’ve been to Melbourne many times and looked at their laneways but I see my laneways are very different because what we try to do here is to blend a lot of businesses together. So, there are not only cafes, but other businesses that help active the edges. You might walk down a laneway in Melbourne and it has got just graffiti. While my belief is that a laneway should be alive. Like in Europe, you go to Barcelona, you go through the old towns. There is a little café here, there is a little fun courtyard in the corner. That was more the idea. It is more like a discovery. You know when you wonder around? The only thing with our laneways, except for California Lane, is the fact that there is no connectivity to other spaces. We are talking to other building owners, within Bakery Lane, to open to the mall and open it to the Little Valley Lane/Warner Lane.

2 – Which designers have worked on those projects?

Winn Lane had no Architect, so it was purely me. I wasn’t even an Architect back then. Winn Lane was our concept lane. I had the idea for small spaces. It’s a very beautiful lane. I never built anything there.  It was a car park between two heritage buildings, and all the areas facing the car park were storage areas of all the shops. So as the leases ran out, I took the back of those shops and flipped it into the laneway, into the car park and removed all the cars and then I built one by one. So, first was the Outpost which is now Winston Hair, they were there for 10 years, they were a clothing shop. Then we add a small café which was once Flamingo Café and now Ben’s Burgers. Little by little I had to find the tenants to have some vision too because I would show them the space before I built it and then I would cut the walls out and put the door and build the shop. They were all artists too, maybe a little crazy like me.

California Lane was by Guymer and Bailey Architects, Bakery Lane is Hayes Anderson Lynch. They were all from the Valley. Now they moved to Toowong and to Kangaroo Point but we have a long relationship with them. I still would like to do the next project with a different Architect because it’s important to see how they think you.

3 – Could you please briefly describe each one of the lanes’ design intent/concept?

Winn Lane was my first, so it is very eclectic. There is no common thing running through it, each shop is very unique. If you look at all the shopfronts, they are not really similarity. But because they are all different it makes it similar. I wasn’t trying to copy anything; all I was trying to do was to give an empty space to people and I believe in them that they would turn it into the creative space. So, Winn Lane as I was just saying was more urban. It is more eclectic; it is more artisan. Bakery Lane was a bit more of a modern thing, it was blending the Queenslander design, the timbers, the bricks and all that, but making it into a commercial complex. So, when you walk in you see all the timbers, they are from recycled Queenslanders that were demolished and we took it and we put them up. California Lane was more because of my dad’s café, so that was the context. It has been there on the 1950’s and 1960’s, those were its glorious days. You have the Miami feeling, like the colours, and all that. So, each lane way has a different mood. So, when you go around you see we didn’t try to copy.

4 – How do you see the future of food retail/hospitality shops after COVID-19?

I don’t know to be honest. Because we have a lot of small shops and small businesses, if they keep with this social distancing thing they can’t survive. If this shop is 50 sqm and at the moment you have 25 people seating down you have to cut it down half to 10. Food is always busy at a certain time, people eat at a certain time, they drink at a certain time, they go out at a certain time. That’s how they need to make the money. And if you can restrict them when they are busy, but they cost still the same, they can’t survive. So, when they get a vaccine that might change. But till then it might be too late because people’s attitudes are changing, they don’t go out as much. They might go drinking and eating at home again, I have no idea. It is a worry.

I read a lot of the news. I haven’t looked at like researches, statistics, but you are going to have to understand the way people live again, and the way they spend money. I think we have to understand that before, the use of the property changes. Like they were saying that all people want to work from home, but our designs are not home safe for work. Remember if you work from home there is all the insurance liabilities that a company has to take on.

5 – Do you have any new projects in mind?

I have got one. One I’ve always wanted to do but it is the most expensive project I’ve ever done. We already own the property. It’s now more timing. It’s again a building in the back of an existing property and putting a high rise on the back, maybe eight floors. It would be the biggest building I’ve done, but what type building it will be, I don’t know. I have no idea. Whether it will be apartments, or it will be offices. That’s the last one. I will try to design it but I will have to collaborate with a registered Architect. That again will be a passion project. Besides that, you know, I got to live life now. I don’t want to be in debt. I like no stress in my life. My father worked very hard in his life and my mom too, and my dad always used to say: “I will give you one piece of advice: You can’t take it with you.”. You know I do these things because I want to do them, not because I have to do. ♥

You can find more information about those projects available on: http://thelanesfortitudevalley.com.au/ *All the images in this post were gently given way by the lanes’ developer.