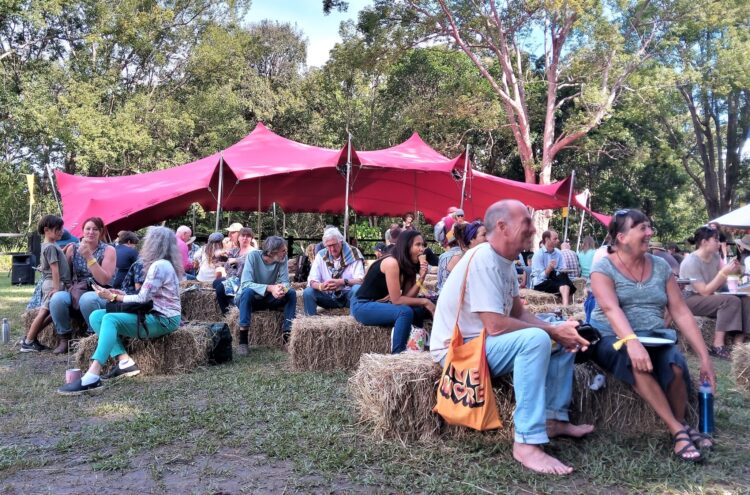 G’day all! I am back and I guess now (re) inspired again and (re) connected.

I’ve been just recently (from May 7th until 9th) to this regenerative, very reinvigorating, event named ‘Renew Fest‘ based in Mullumbimby, the heartland of the Northern Rivers, in the New South Wales state of Australia, and I feel I have a lot to say about this joyful experience. Perhaps that was my personal “Great Reset”. Lol! Considering the latest events around the world related to health emergency and environmental issues, it’s a fact that today we’re going through many changes. Which make me think these are definitely transition times. I guess a lot of people already feels and understands it.

Changes can be scary, it can be stressful, it can also be paralysing for some. However, the fact is that change is the only permanent thing in this life, in this planet, and as a living part of it maybe we indeed need to accept it and deal with it in a more productive and transformative way showing more resilience if we want to live with less “drama”.

Perhaps there has never a better time to rethink and redesign our society as today, which as far as we know, has never been so globalized and so connected before. Even though our willing to connect paradoxically clashes with our urge to reaffirm our personal perceptions of reality, and many times submit others to it, as an attempt of “colonising” each others’ minds. Sign at the Renew Fest event, based in Mullumbimby, NSW. Source: The author’s personal gallery.

“Colonisation” has played a huge role in our human society for centuries. And it doesn’t happen only in an international scale between competitive nations, but it also happens at our personal “small” scale and its being widely exposed through our contemporary digital interactions. In other words, we, as individual, tend to try to convince others of our personal opinions, perspectives, just as powerful countries try to colonize the ones with less resources. There’s absolutely no difference, just the effects take place in different scales.

Once we do an exercise of consciousness’ expansion we realise there are indeed different realities, there are different truths. Have you ever thought about it? It’s just a matter of perspective. Even Science can be mistaken when it doesn’t take into consideration different perspectives of reality. Actually, ancient civilizations have a lot to teach us about this topic! And perhaps that’s what’s hidden behind part of the social confusion and sense of disinformation we are facing these times.

Returning to the “Colonisation” topic, the event “Renew Fest” presented me with a brand new term which I thought as fantastic and which could bring many insights for our today’s challenges. For the first time I’ve heard of the word “decolonisation”. The term was included amongst the festival’s themes with the intention of achieving what they call a “Regenerative Humanity”. Off course, the mentioned “decolonisation” proposed by the festival is related to the Australian First Nations (Indigenous people of this land) and the treatment those people have received since the British colonisers first landed here. Actually, cultures thousands of years older than the colonisers’ which obviously completely ignored the existing knowledge and world’s perspective. However, I would like to bring it to a different perspective. A perspective that can be also very challenging for many people because it goes against some of our personal “needs”. A perspective that can be very real and at the same time enormously inconvenient.

Humanity has always been facing huge challenges. It’s well known that most part of the world’s population, specially the one living in underdeveloped and developing countries, never stopped struggling for survival, while a small percentage of the global population live practically in another planet. However, I found myself faced with a socially shocking reality during the ‘Renew Fest’, and I wasn’t in an underdeveloped or developing country, I was in Australia, the developed country which is considered as a “model” of society in many parts of the world.

The “Australian Dream” can somehow be compared to the “American Dream”, and perhaps even more of a dream considering the escalating social crises that the North American country faces today. During the ‘Renew Fest’ I saw a lot of hope, but also a lot of despair. The current changes in the climate are enormously affecting people in the countryside of these parts of Australia. People in the Northern Rivers region has been through droughts, bush fires, floods and a major real estate speculation climb caused by high levels of immigration and tourism expansion. I saw many Australians, of different ethnical backgrounds including Caucasians, crying for not having where to live anymore, being forced to completely say good bye to their original communities, and that was heartbreaking and shocking at the same time considering millions of people in my country (Brazil) struggle with exactly the same issues.

Thus, we found ourselves there reunited trying to come up with solutions, ideas, for the “Housing Emergency” they’ve been facing amongst a reality that benefits more corporations and wealthy landlords which tend to invest more in luxury and temporary dwellings than in the ones that could be used by the local community alongside with a lack of proper reaction by the government. Paradoxically one of the solutions which emerged was about making use of First Nations’ land, kindly donated by the ones who have been so oppressed throughout the country’s history. Perhaps love will save the world instead of Capitalism?

Besides the talks addressing local and global issues and posterior discussions, organised in a very interesting format by the way, we were able to listen to big names related to the permaculture area such as David Holmgren, who wrote ‘Permaculture: Principles and Pathways beyond Sustainability‘. The talk was very inspiring and brought his resilient and regenerative perspective to the public of the event applied to different environments such as rural and urban. He also presented a new publication related to suburbs which looks very interesting and very much needed in our contemporary cities, ‘Retrosuburbia: The downshifter’s guide to a resilient future’, this one is now definitely on my list. I could not forget to mention the exhibitors present at the festival showcasing their innovative products related to sustainability and regenerative living, such as models of  “Tiny Houses” (already a previous trend topic in our Blog), alternative types of structures as geodesics, water treatment systems, alternative heating systems, caravans, solar powered cars (not the Tesla ones) and even new ways of treating the dead, considering their return to the natural environment. The event was also plastic waste free and we should bring our own cups and plates. Everything very inspiring and at the same time very grounding, immensely realistic. The festival was definitely an opportunity to breath deeply amidst so much “green wash” we see everywhere these days and perhaps our chance to have our “Great Reset” through imagining and co-creating a new more regenerative reality ♥