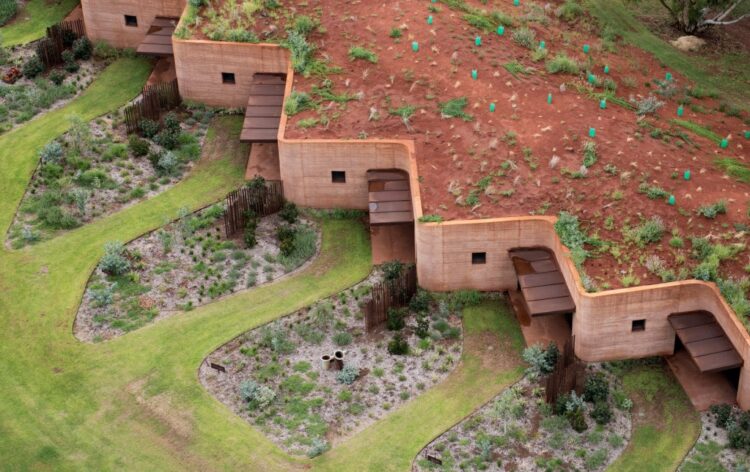 Hi all! Hope you are all doing well during these days. I am very happy to be back and share with you some information about one of my biggest passions, constructions well integrated to the environment in this Asia-Pacific parts of the world. Now I’d like to take you to Western Australia state, the ‘Pilbara’ region to be more specific.

According to Wikipedia, “The Pilbara (/ˈpɪlbərə/) is a large, dry, thinly populated region in the north of Western Australia. It is known for its Aboriginal peoples; its ancient landscapes; the red earth; and its vast mineral deposits, in particular iron ore. It is also a global biodiversity hotspot for subterranean fauna.” Also, “The Pilbara region covers an area of 507,896 km2 (193,826 mi2) (including offshore islands), roughly the combined land area of the US States of California and Indiana. It has a population of more than 45,000, most of whom live in the western third of the region, in towns such as Port Hedland, Karratha, Wickham, Newman and Marble Bar. A substantial number of people also work in the region on a fly-in/fly-out basis. There are approximately 10 major/medium population centres and more than 25 smaller ones.”.

This particular project in the Pilbara region of Australia – The Great Wall – caught my attention not only because it is a rammed earth construction, which I very much like, but also for its elegant and environmentally based design approach which you can clearly observe at a first glance. Gosh! I found this project by Luigi Rosseli Architects from Sydney, Australia, so beautifully designed that I decided to make a post about it. Overall view of the building complex located in the Pilbara region. Source: https://luigirosselli.com/residential/the-great-wall-of-wa

This design actually reminded me a lot of the “EarthShip” construction method, which is such an interesting concept. Have you ever heard of “Earthship” constructions? Mate, they can be so interesting and well merged with the landscape. “EarthShip” buildings are usually merging with its surroundings, make use of local and recycled materials and use a lot of thermal mass technology (through the use of the earth walls and its direct contact with the soil), which make those building highly energy efficient. You can find much more information about it through the ‘Earthship Global‘  website. Or for some other interesting insights about it visit: https://gokcecapital.com/earthship/. “The Great Wall” project is obviously not an EarthShip building example, but it has its similarities, don’t you think? Actually, The “Great Wall” is considered The longest rammed earth wall in Australia and – probably – in the southern hemisphere. At 230 metres long, the rammed earth wall meanders along the edge of a sand dune and encloses twelve earth covered residences, created to provide short-term accommodation for a cattle station during mustering season. With their 450mm thick rammed earth facade and the sand dune to their rear and forming their roofs, the residences have the best thermal mass available, making them naturally cool in the subtropical climate.

The residences are stepped to maintain a level of privacy on each covered veranda. There are contiguous but are not internally linked. The rear walls of the residences are buried under the sand dune. Source: https://luigirosselli.com/residential/the-great-wall-of-wa The deep awning roof is designed to keep the sun out during the hottest part of the day and invite the inhabitant to outside and enjoy the cool evening breeze. Source: https://luigirosselli.com/residential/the-great-wall-of-wa The northern end of the rammed earth wall tapers down to where an older building is used as a communal meeting and sitting area. A pergola constructed of old drilling pipes provides a chequerboard of dappled light. Source: https://luigirosselli.com/residential/the-great-wall-of-wa

The rammed earth wall (construction) is composed of the iron rich, sandy clay that is a dominant feature of the site, gravel obtained from the adjacent river and (bonded with) water from the local bore (hole). The design of the accommodation represents a new approach to remote North Western Australia architecture, moving away from the sun baked, thin corrugated metal shelters to naturally cooled architectural earth formations.

The project also won a couple of awards in 2016, such as: The awning roof is a Cor-Ten steel cyclonic shade frame, mirrored by a concrete slab on (the) ground. The concrete slab contains gravel and aggregates from the local river, which lend a reddish colour to its polished surface. Source: https://luigirosselli.com/residential/the-great-wall-of-wa Internally, one finds a comfortable environment, cooled by the rammed earth walls and the metre deep sand hill. The interior design by Sarah Foletta is a restrained, natural and robust selection of materials and furniture. Source: https://luigirosselli.com/residential/the-great-wall-of-wa

On the highest point a Chapel dominates the Musterers’ quarters; a multipurpose room imbibed of the sacred aura of the place, from the original indigenous caretakers of the site to the headstones marking the graves of the first settlers at the bottom of the hill. The same room is also a meeting point, a meditation place and a contemplative look out.

The Chapel is a simple oval rammed earth construction with skewed conical Cor-Ten steel roof that provides protection from the scorching sun. The cone apex, truncated at an oculus, provides a solar meridian on the floor. A gold anodised aluminium ceiling and a sacred verse inscribed on the ring beam of the roof are subtle spiritual components that do not attempt to rival the intrinsic spirituality of the landscape. Below the chapel lies a hundred year old cemetery, enclosed by a simple fence to keep the local fauna out. Source: https://luigirosselli.com/residential/the-great-wall-of-wa The roof is made from Cor-Ten steel sheets, forming an oblique cone and culminating with a skylight in the apex. The roof was fabricated off site and transported in two halves. Source: https://luigirosselli.com/residential/the-great-wall-of-wa

So what are your thoughts about the project? Would you be up for a stay in this peaceful and beautiful sacred place in the dry red lands of Western Australia, reconnecting with the land and the “Earth”? Couldn’t it easily be an accommodation building like a hotel? Mother Earth’s diversity combined with human ingenuity can provide us with such beautiful natural materials and design concepts. This integration always makes me feel so good especially if we can think we could all be one living being! ♥

The Great Wall of WA